Story 3: The Edge of Destruction 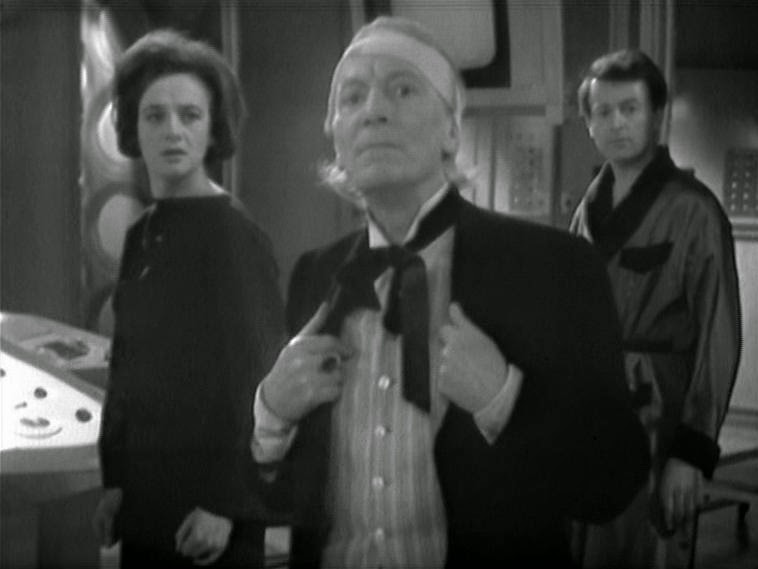 As they hurtle toward the edge of destruction, the TARDIS crew turns on each other. Can they overcome their mutual distrust and paranoia before the TARDIS is destroyed?

Having just finished the first encounter with the Daleks, Doctor Who gets its first bottle episode!

This two-part episode originally aired from February 8 to 15, 1964.

At this point, the BBC had only ordered thirteen episodes of the show, and between the four-part premier and the seven-part followup, there were two episodes left.

There was very little money left in the budget, and so they did a show confined entirely to the TARDIS, allowing them to save money on sets and actors (since only regular characters are featured).

After taking off from planet Skaro (which we don't see), there is a disastrous explosion in the TARDIS, knocking everyone unconscious.

They begin to wake up, but they are injured and acting strangely. Susan and Ian both seem to have partial amnesia. Ian is weirdly detached, and Susan gets hysterical. Barbara is the voice of sanity.

The Doctor has a gash on his head, but Susan gets a special, striped ointment-laden bandage for it that will change colors as the ointment is absorbed and the wound heals (more Time Lord tech, not that we know they're Time Lords yet).

Susan also declares that there is "something here . . . inside the ship," and she asks Ian, "You feel it, don't you?"

The TARDIS itself is acting strangely, and the doors open and close erratically when Ian approaches them. Susan tries the controls but is shocked into unconsciousness. Ian carries her back to her room and puts her to bed (her bed being a kind of curved lounge chair).

He then gets water out of the food machine that was introduced in The Daleks. When he comes back, Susan is up, has a pair of scissors out, and doesn't recognize him. She threatens him with the scissors but then stabs the heck out of her bed.

Afterward, Barbara begins to entertain Susan's idea that something has gotten onboard the ship--an animal, a man, or an intelligence of some sort, but the Doctor is incredulous. He an Ian go to check the ship's "fault locator."

Meanwhile, Barbara tends to Susan, who has retrieved her pair of scissors and is acting paranoid. Barbara demands that Susan gives the hidden scissors to her, prompting Susan to go crazy. The young Time Lady restrains herself long enough for Barbara to take the scissors from her.

When the doctor tries to find out where they are, the TARDIS's viewer shows him still images of where they've been, including "the planet Quinnis of the fourth universe," which Susan says they visited four or five journeys ago (thus shortly before the start of the series) and nearly lost the TARDIS.

The Doctor has been acting suspicious of Ian, and now he accuses him of sabotaging the TARDIS in order to "blackmail" him into taking them back to England.

Barbara flies into a rage and stands up to the Doctor, pointing out how Ian and she have helped the Doctor in their two previous adventures.

Then she turns around and sees a melted clock and freaks out. It turns out that everyone's watches have melted, too, and she throws her away and breaks down in sobs.

Now the Doctor returns with a bunch of cups on a tray and announces that they all need to calm down and think, for they're all overwrought. He says that the cups contain nightcaps.

After everyone is asleep, the Doctor sneaks around the TARDIS and goes to the control room. He suddenly turns around and a pair of hands seize him around the neck.

The Doctor proposes putting Ian and Barbara off the ship, even though they don't know where they are and it might not be a survivable environment. Susan is trying to convince him otherwise when there is a terrible noise, which Susan identifies as the danger signal.

It turns out that the TARDIS's fault locator has entirely lit up, signaling that the ship "is on the point of disintegration." This convinces the Doctor that Ian and Barbara are not to blame.

Barbara becomes convinced that the ship has been giving them clues to what is wrong. The Doctor initially says, "My machine can't think," but he amends this by saying, "Think not as you or I do, but it must be able to think as a machine."

The Doctor gives Susan and Barbara a meaningless task and then confides to Ian that they have only five minutes before the TARDIS blows up.

The Doctor deduces from the pictures shown on the screen that they have been thrown back to the beginning of a solar system, which is drawing the power from the TARDIS and causing their problems.

Upon leaving Skaro, the Doctor used the "fast return switch" to go back to Earth, but they've apparently overshot it and gone back to the beginning of our solar system. Upon examining the fast return switch, they find it's stuck. The Doctor fixes a spring in the switch and the TARDIS returns to normal.

In the wake of these events, the characters make up to each other. The Doctor, in particular, eats a lot of crow and apologizes profusely to Barbara, who he credits with saving their lives.

Later, after they've landed on a cold planet, the Doctor further apologizes to Barbara, and she is willing to forgive him.

As they are going outside, the Doctor comments to Ian that the Ulster coat Ian is wearing was given to him by Gilbert and Sullivan--the first historical name drop on the show.

Outside, Barbara and Susan have found a gigantic footprint in the snow.

Necessity really is the mother of invention. The budgetary limitations of the original order of thirteen episodes forced the production crew into a bottle episode that ended up being quite watchable.

The fact that it's only two episodes long helps. That makes it approximately the length of a modern Doctor who adventure, which means it doesn't drag in the way the six- or seven-part adventures tend to.

Although television is, in general, much faster paced now than in the early 1960s, it makes one wonder why they didn't do shorter serials back then. Presumably, one of the reasons would be budget. The serials can't all be bottle shows, meaning you have to construct sets and costumes and hire guest actors, and if you're going to go to all that expense, you want to get your money's worth, leading to longer adventures so that new sets and costumes have to be constructed too frequently.

This adventure definitely has flaws. William Hartnell, in particular, has a lot of stumbles over his lines. More importantly, the who situation is only semi-coherent.

What really works, though, is the fact that, without guest monsters or cultures, this serial is devoted to the relationships among the characters. It puts them in their strongest conflict with each other yet and ends up bringing them closer together (a la the Epic of Gilgamesh).

There are also a number of nice smaller touches in the show. For one, we get to see more of the TARDIS, including the sleeping area.

There's a particularly nice bit when the Doctor is unconscious at the beginning of the show, and he stirs and cries, "I can't take you back, Susan! I can't!"--apparently a reference to their home world.

Just before this, Ian takes the Doctor's pulse and declares that his heart seems okay. The fact that he has two hearts hadn't been established yet (though, in fairness, a human surgeon also failed to notice the second heart in the 1996 Doctor Who TV movie).

The idea that the TARDIS itself is trying to warn the characters in a weird, non-human way also adds depth to its character, and this theme will be brought to its furthest development (so far) in the 2011 episode The Doctor's Wife.