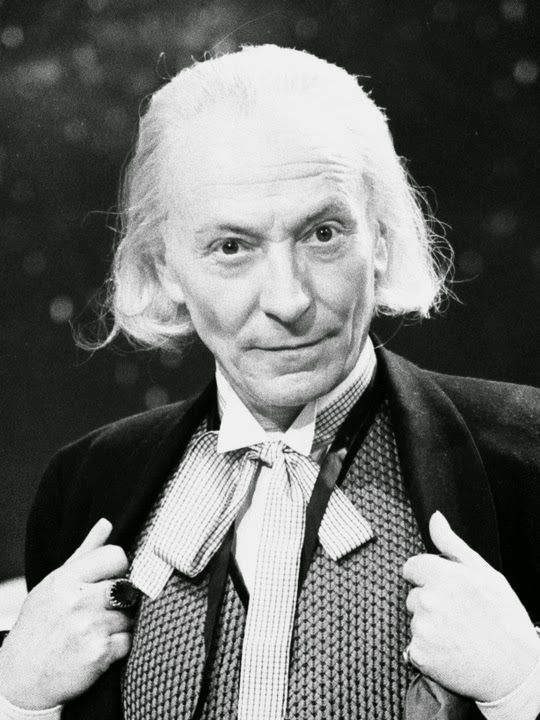 The epic re-watch begins here, where it all started, with the very first episode of Doctor Who, titled An Unearthly Child.

This four-part serial was broadcast from November 23 to December 14, 1963 (before I even existed!).

We don't get to him straight away, however.

Episode 1 begins with the opening credits of the program, which features the first broadcast arrangement of the familiar Doctor Who theme song, with its eerie thrumming (identified, nearly 50 years down the line, as the heartbeat of a Time Lord; see Story 202, "The End of Time") and soaring organ riffs.

The opening credits also featured an uncanny, abstract shifting pattern. It wasn't yet the tunnel-like time vortex of later seasons. The elements of the pattern have a rounded, organic quality, a bit like the blobs in a lava lamp, though that is clearly not what they are. However this effect was produced, it must have made a striking effect on the original, British viewing audience.

Together with the eerie theme song, the visuals must have signaled the audience to expect something weird, strange, otherworldly--and unlike any other show then on the BBC.

When the episode itself begins, we get a fog-bound shot of the I. M. Foreman junkyard at 76 Totter's Lane, in London. Amid the junk, we see a battered, disused police box, though we don't yet know its significance.

The scene shifts to Coal Hill School, where we find two teachers--Ian Chesterton and Barbara Wright--who are discussing one of their students--Susan Foreman (note that her last name seems to be taken from the name of the junkyard owner).

Ian teaches science and Barbara teaches history. Both are floored by the amazing knowledge Susan displays, coupled with her stunning ignorance on other matters. Susan is the "unearthly child" of the title.

We then shift to meet Susan herself, who is listening to zippy '60s tunes on a transistor radio.

The teachers follow Susan home after school and trace her to the junkyard we saw at the beginning.

They also find--and touch--the police box that we saw earlier. When they do so, they note a "faint vibration" and Ian declares that it's alive. (How literally this is meant in the first episode is not clear; it will be taken very literally in later seasons.)

We then meet the Doctor (not yet named), who tries to bluff Ian and Barbara away from the police box, from which the two teachers heard Susan's voice come. The Doctor seems happy, confident, and mysterious.

Everything changes when the teachers suddenly find themselves inside the police box, which is dramatically larger--as well as futuristic--on the inside.

The Doctor tells Susan that he knew something like this would happen, that if they remained in one place for too long this would occur.

Susan identifies the Doctor as her grandfather.

When queried about how the police box can be larger on the inside than the outside, the Doctor compares it to portraying a large building on a television screen--the latter being something that can exist in a much smaller house.

Susan also says that she was responsible for calling the police box, which is "a ship," a TARDIS--the acronym standing for "Time And Relative Dimensions In Space."

The Doctor also says that he is not from this century, but he tolerates it. He indicates that they are "wanderers in the fourth dimension" (i.e., time), that they are "exiles," cut off from their own people, without friends or protection. But the predicts that one day they shall go back.

Susan says that she was born in another time and on another world. (In an unbroadcast version of the episode, she said they were from the 49th century.)

A crisis occurs when the Doctor plans to take Ian and Barbara with them on a time journey. Susan objects and is even willing to leave her grandfather to stay with Ian and Barbara in 20th century England, but an accident occurs and we hear the soon-to-be familiar wheezing of the TARDIS as the time rotor on its central console moves up and down.

We then get a glimpse of abstract graphics that mirror the opening credits and foreshadow the later time vortex.

The episode ends with the TARDIS materialized on a primitive, desert landscape.

Having begun the series with an episode that contained a lot of world-building of a futuristic nature, we now shift to the past.

The TARDIS has landed 100,000 B.C., and its crew finds itself in the midst of a bunch of cave people.

Unfortunately, we also run into a problem that is characteristic of many of the early Doctor Who serials, where the plot slows down to a dramatic (or, rather, un-dramatic) degree.

We also have the first indication that the TARDIS does not travel in a controlled way. The Doctor does not know when and where they are. He says that he wishes the TARDIS would not keep letting him down.

The Doctor also refers to the title of the show when Ian refers to him as "Doctor Foreman," and he replies, "Doctor who?"

The Doctor further comments on the fact that the TARDIS still appears as a police box and has not changed. He finds this very disturbing, indicating that the malfunction in its ability to change form has occurred very recently.

Susan also notes that she doesn't know why the TARDIS hasn't changed. She further says that it has been a column and a sedan chair but it hasn't happened this time, indicating that this is its first malfunction concerning shape.

Meanwhile, Doctor Who is lighting his startlingly large and ornate pipe, indicating a difference in children's broadcast standards now and then, when a grandfatherly figure could smoke his pipe in peace--unless he is whacked over the head by a caveman, which the Doctor promptly is.

The fact he has matches and is able to light his pipe and make fire come from his fingertips massively impresses the cavemen.

At this point, the Doctor and companions get embroiled in inter-tribal, fire-making politics, with lots of being captured, being let go, running around in the jungle, being menaced by animals and cavepeople, etc.

In other words: mindless, paint-by-numbers "action" designed to fill airtime without really requiring the writers to think very hard.

Unfortunately, this will be all too common in coming episodes.

On the other hand, there is a bit of character development, as both Ian and Barbara challenge the Doctor when deciding what to do at various junctures, and he defends himself, revealing that there is some truth both in his point of view and in that of the companions. This presents both the Doctor and the companions has having limitations and as having something to bring to the table.

From a writing point of view, that's good!

In this episode, we get more inter-tribal, fire-making politics. Boring!

Finally, the Doctor and companions make it back to the TARDIS and take off.

They land on a strange planet that will introduce them to their first futuristic adventure.